One day old Bill, a gunsmith and skeet shooting buddy, came to me and said, "Hey, you're a fly fisher, take this," and handed me a big, mostly plastic reel that he assumed was a fly reel. I didn't know exactly what kind of reel it was. but it wasn't any kind of fly reel I'd ever seen. But I took it and found a use for it. I learned later the reel is called a mooching reel used for some type of salmon fishing, I'm guessing big, deep water 'cause it'll hold nearly a half mile of 14# test line.

I had two old broken spinning rods -- why I keep this stuff I'll never know -- but with a little cutting and epoxy they were fitted together and have made a handy tool for re-spooling lines and particularly for cleaning fly lines.  The big reel works great for that and I've been using it for years.

So, I decided to put a new line on my oldest trout reel. I've had the new line for a couple of months, purchased along with a couple of new shirts paid with Cabela's points. I figured it was due because the old one had been spooled for a long time, years, in fact. For some reason I decided to do the job from my easy chair, close to my coffee cup, and pulled the old line off and dropped it to the floor instead of getting my tool. I was surprised that that old line was in such good condition -- no cracks or noticeable wear at all -- and I knew then I would keep it as a spare and rewind it to the empty spool the new line came on.  So, after the new line was on the fly reel, I started wrapping the old one and realized it was easier said than done. What a tangle! The spooling tool would have saved some frustration. Lesson learned. I should have known better, though seems fitting for April Fools Day. 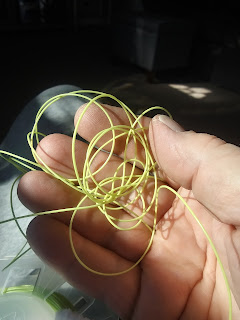 Incidentally, I don't typically recommend or endorse any brand name or products to anyone. There are folks better at analyzing this stuff than I am, and my advice could be interpreted as the blind leading the blind, but I have a couple of the less pricey Cabela's lines on reels and they perform and last as well, for me, as some of my lines costing twice as much. Just saying. Good fishing!