I’ve been seeing so many big fish photos posted on social media that I’m wondering if I’ll become de-sensitized to it all. You know, kind of the same way we ignore road work signs because they are all over the roads. The latest of a very nice smallmouth bass caught by a lady I know makes me think I’m not fishing enough. Now that gal lives a very interesting life, produces excellent programing for a popular PBS television station, is on top of the music scene, an outdoor adventurer, and one of the most pleasant people I’ve met. And I don’t even know her very well.

Anyway, maybe the bass she is holding looks so big because she is so small. At least compared to me, she is. I wonder if my posed fish pictures would look better if I possessed a smaller stature. I’m a pretty big guy and holding a twenty incher in front of myself doesn’t have the same effect as someone smaller posing with the same fish. On the other hand, if the fish I’m holding looks big, it is big.

It rained all night last night and was raining when I woke up this morning. It was a good day to take off from my project of adding yet another roof to my property. I’ve decided I need a better place to store the boat, thus an addition to the garage. When I say “yet another roof,” it’s only because I recently reviewed my property tax description and was somewhat surprised that everything about the place is included. Even the dimensions of my rough old woodshed -- and the broken down little garden shed. I’ve never been home when the tax assessor comes around, but obviously he carries a tape measure and isn’t afraid to wander around. Funny thing is he has the dimensions of my house wrong. Oh, well… what’s a couple of feet in a county this size? So I went fishing.

I hadn’t had my small steam rod out for a long time so today I took it over to the little trout stream not far from here. It’s a posted trout stream, all right, but pretty marginal water, I think, compared to some of the other streams I’ve fished. But it’s close. I usually fish what I call the north route, but today I thought I’d try the south end again, as I haven’t been there in a couple of years. It all depended, of course, on how bad the road was. I pulled on my waders here at home so I wouldn’t have to lean on the truck in the rain and mosquitoes when I got to the river. 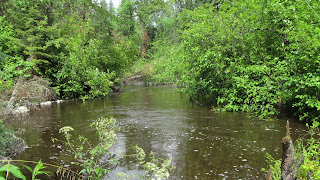 The two-track road into the river was in good shape, better than the last time I was there and I surprised a badger when I rounded a curve, which surprised me as I don’t think much about badgers around here. Bears, wolves, fox, deer, marten and fishers, yes. But not badgers. I immediately thought about my companion for the day, an over-weight water spaniel named King who I am watching for a couple of weeks, but the river was nearly a mile away so I didn’t expect to see the badger again. It’s reasonable to think that King, being a water spaniel, would enjoy the chance to get into the woods and hunt a little, but he’s never shown any hunting ability or desire at all. And he doesn’t like water. Go figure. He doesn’t retrieve and won’t even chase a ball, though I felt like I should do something with him and assumed he’d make a good fishing dog so I brought him along. I was right about that. He stayed at my feet as we moved down the river and watched patiently from the bank when I stopped to fish. 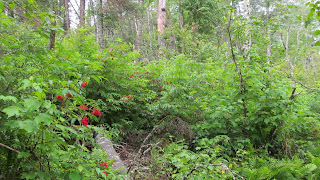 After all the rain we've been getting the river was just about how I thought it would be – high and muddy. Still, I had the day to fish and fishing is good. The shoreline cover was high and thick and the streamside path was little used and hard to make out in places. Pushing through the foliage made me realize that a short and tough rod was perhaps more important for the hiking part than the fishing part. Mountain ash lining the vague path added a festive look. There were trees down everywhere, balsams, spruce and big white pines – across the faint trail and across the river, but here and there I’d make my way to water’s edge and cast a weighted nymph into the murky waters. Short roll casts were the order of the day and all that was necessary. A doe and fawn were spotted and I watched them bound away while King wondered why I paused. Occasionally there was room to unfurl a cast and my little 7 foot, 9 inch rod felt just right.

I never caught a fish. I never moved a fish that I know of. I lost a few flies, broke off on underwater snags and I left the river thinking about a camping trip to some better trout water. I didn’t have to call the dog. He was right there. 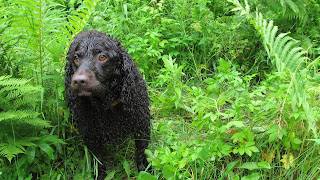