It promised to be a warm one. Likely the hottest day of the year, so far. I’d been thinking about that little lake I was on two days ago and thinking I should give it another go. I mean, there’s nothing wrong with catching some fish before breakfast, right? I never get tired of explosive strikes and the tug and bend of the rod. The canoe was still on the truck rack and all I had to do was put on the coffee and take the dogs out for a little romp before heading over to the lake.


I had pretty much the same outfit as the other day, except this time I would bring the old bamboo rod I had and give it a try. It was over 25 years ago when a friend of mine found the old cane rod in the garage of a property he'd purchased. It was in pretty rough shape but he thought I might like it so he gave it to me. It’s a nine foot, three piece rod and had two tips. One of the tips was split and shattered but the rest of the rod was OK. The finish was about gone and what guides were left were mostly rust. The ferrules were corroded but solid as was the down-lock reel seat. I could find no name on it, but I knew the right rod could be worth some real dough. I also knew there were plenty of old mass produced bamboo rods that had little value and I figured this was one of them. There are folks who know and fish bamboo like it was a religious experience. I won’t argue that as I’ve felt some deep, call them religious, feelings myself while fishing. The rod didn’t have much to do with it, though. Fly rods are pricey, and cane rods can be crazy expensive. I don’t know if I could ever appreciate bamboo as some describe it. My fly fishing is fulfilling with the rods I have. Heck, I love it.


For an indoor project one winter I refinished the old rod. I went to the library and checked out Garrison’s rod building book. I mail ordered new guides and built a rod tying rack. I stripped the rod clean, tied new guides, wrapped thread over the ferrules, and varnished the rod in an elaborate PVC dip tank I build. For the dipping I used an electric motor from an old rotisserie grill as a winch and a sort of block and tackle rig that slowed the process down. After filling the tank with Pratt & Lambert varnish, the same stuff Garrison used, I lowered a rod section into the finish and let the motor draw it out slowly, something like 4 inches per minute. The result was a flawless varnish job. When all was said and done the rod looked pretty good, but I never fished it. That was in 1989. It's been standing alongside the other rods for all these years. Now I figured if it was ever going to catch a fish, the little bass lake would be a good bet. 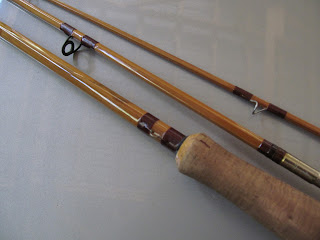 I’m not a purist but there are some traditions I like and believe are worth holding on to. Not all pertain to angling, but I reckoned the old wooden rod should be fished with deer hair. I’d found an old reel with some old unmarked line that if I remember is a 6 wt. Possibly 7, or maybe one of those combo 6/7 lines. I’ve had it so long I don’t remember when I got it, but I had to snip off about a foot of cracked line to get to something I could attach a leader to. The old rod is pretty heavy and sort of whippy and I wasn’t taking any bets on how long I’d cast with it before switching to my graphite.


This time I brought an anchor so I could stay in relatively one spot and sort of fan cast a section before moving on. I was pretty eager and could feel it in my stomach when I pulled in to the landing. These hot, still mornings seem just what bass like.


The lake was as flat as glass and I hurried with the canoe to escape the morning mosquitoes. I started settling down, relaxing, as I paddled across. I was again alone on the lake and that in itself made it worth it. When I closed in on the south shore I lowered the anchor and clamped the rope off to the gunnel with a spring-loaded woodworkers clamp. I wouldn’t need much to hold the canoe, but the slightest breeze can push it too close, or too far in the time it takes to make a cast.


I was anxious about how the rod would perform, and expected it to have a slow action but was surprised at how easily I played the line out and with two false casts laid the fly about two feet from the bank right over a submerged log. There I watched it. What triggers a fish to attack a funny looking lure sitting motionless I’ll never know. Perhaps the hackle feather tail pulsates a bit, along with the marabou behind the collar. Is another fish taking a look causing a competitive response? Whatever it is, the splashing strike is startling and the pull on the bent rod is delightful. 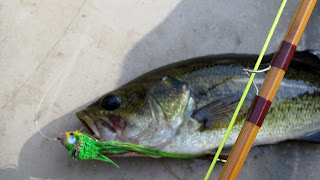 That’s the kind of water this is. A first cast fish is no surprise and seeing the light bellied green-backed bass dart back and forth shaking their heads and jumping clear of the water is nothing but pure fun. I cast the old rod for just over an hour, and did well with it. It has a slow, soft action but could toss a wind catching deerhair fly a surprising distance, even with my questionable ability. By then I’d caught and released at least a dozen small bass and lost almost that many. That was enough. I could have went around the lake over and over and there’s no telling how many fish I might have caught. Maybe enough to grow tired of it. I remembered the coffee in my truck would still be hot and there’d be breakfast at home so I paddled in, eager for next time.