There’s not a thing more peaceful than being on a still lake early in the morning. Nothing that I can think of, anyway. Other than the birds singing, the only sound is my fly line coursing through the air and the plopping popper being stripped back in. It won’t be long before the drone of an outboard motor out on the main lake will reach my ears, but for now the lake is mine. 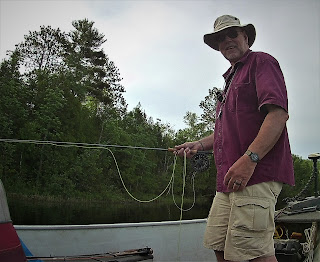 I could consider this lake my home waters, but there is plenty of the lake I have yet to explore. Partly because I tend to fish a few favored spots I’ve found and partly because this lake covers nearly 40,000 acres with over 300 miles of shoreline. Of course, there are many boat access landings on it, and I can be on one in less than twenty miles from my house. As the crow flies the southernmost bay is only ten miles away.

There is plenty of development along the shores, more than a guy like me cares to see – everything from small, sagging cabins built by iron miners back when they could afford a chunk of lakeshore to the multi-million-dollar mansions of the wealthy, mostly absentee owners who are, well, mostly absent. Progress, I suppose.

Still, there are miles of undeveloped shoreline, rocky bays and islands where I go and spend hours casting poppers and streamers for bass, pike, and muskies. Some of the fish are big, some are not. Sometimes the bite is on. Sometimes it's just a boat ride. Pack a lunch. Sip some coffee. Look around and wish it was always like this. 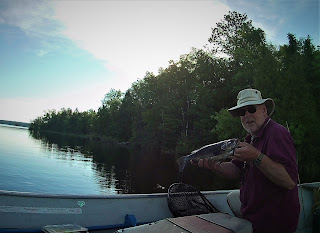 I was on the lake again the other day and pushed my boat off at a favorite landing. Early season madness was over, the walleye fishing had evened out and there was less rush to get on the water. Most folks were either still in the sack or having breakfast and thinking about mowing the lawn instead of fishing. I was glad that no one was around, because right from the launch I drop the electric trolling motor and start working the rocky shoreline. I can’t be the only bass angler that recognizes good habitat, but it seems people are eager to get away from the boat ramp and I’d sooner not advertise good fishing holes fifty feet from the dock.

While it would be nice if it was fishing anytime, all the time, of course it’s not. There’s been some tough weather this season and though plenty of the country is seeing worse, the weathercasters continually warn of approaching severe storms. A few nights ago I stood at the bedroom window listening to a roaring wind and trees cracking, followed by buckets of rain. Luckily no buildings were damaged and the electricity was only out for a short time, but I’m still not finished cleaning up downed trees. But the trees aren’t going anywhere so tomorrow I’m going fishing. 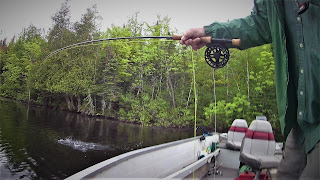