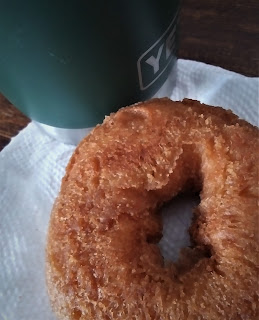 The morning started with anticipation and a quick and favored breakfast of hot toasted English muffins melting a generous share of country butter and a healthy dripping of local honey. Add a handful of chilled blueberries for good measure. The sun would be up in less than an hour and we had a way to go to the desired cover. My slim Silver Pigeon was cased and ready. The shooting vest was hanging from the hook in my truck with a fistful of yellow Federal 7 1/2s in the pocket. Gabi was spinning at the door, eager to take her place on the front seat, knowing what was ahead.

The season started a little too warm and the cover a little too thick for good grouse hunting, as usual, but October’s chill straightened that out. There appeared to be plenty of birds around and social media sites were plastered with advice on where to find them and photos of dead grouse. Gabi and I were doing fine, and the first birds of the year fell to my grandfather’s 16 gauge – a gun I wanted to add my own experiences to the history of that old Remington. 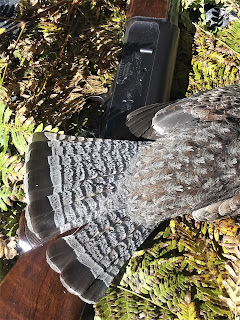 Sometime along the way I switched to the twenty, a gun I believe I shoot best and the gun I’d hunt out the season with. After a stop to refill my coffee, we drove to the cover. What used to be a logging road is overgrown to a single-file path trafficked by more wildlife than people. A quarter mile from the trailhead the beavers moved in and flooded the trail, leaving a narrow crossing on the dam itself. I’ve hunted this place for years and have seen it develop from prime grouse cover to the older woods it is now. But it’s a picturesque hike with a bird dog – a mix of aspen, birch and pine with several ponds along the way. Ducks, geese, and swans are often spotted, and we always find grouse.

Gabi raced across the beaver dam well ahead of me and I heard her bell drop into the thick stuff left of the trail. I was climbing the grade from the pond when her bell fell silent. She was a good ways out and after a stumbling, ducking search I spotted her locked up at the edge of alders looking straight at me. The grouse blew up and pumped for altitude when my shot caught it. Ah, the smell of burnt power! Feeling good, I pushed back to the trail, keeping Gabi close. Five minutes later she was pointing again, a bit off the right side of the trail. Gun at the ready, I ducked low balsams branches when a grouse jumped from the tree and offered no shot. A second grouse was taken over her point a bit later and I was enjoying the beautiful day with a fine dog and the comfortable heft of two birds in the bag. Then I missed the next four birds, sending seven shots with no results. That was the start of my shooting slump. 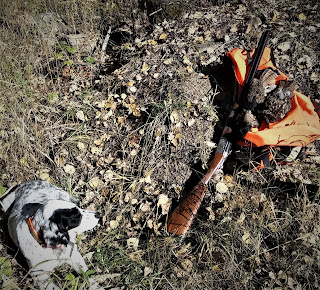 My dictionary defines a slump as “an unaccountable decline in effectiveness.” Well, ok, it’s not like I’m a crack shot to begin with, so any decline is noticeable. I’m still haunted by a missed shot that I knew I would miss because of poor gun mounting: the grouse rose above the bare treetops and offered an easy left-right crossing shot. I rushed the shot and failed to raise the buttstock to my shoulder where it belongs. I thus didn’t get my cheek down on the stock and I knew I was off even as I pulled the trigger. Twice.

Nash Buckingham wrote, “Swift, comfortable, accurate gun mounting that coordinates timing, forward allowance and barrel level (a trio not easily assembled) is a must.” You’d think by this stage of the game I’d have that down pat. Excuses are easy to come by and frustration can be tough to overcome, but the grouse win more often than not, so bid them farewell and hope they live to breed next spring.

Some shooting friends and I were discussing the demise of little cafes that used to be around. You know the kind where you enter and take whatever is available, a chair at a table, a seat in a booth, or stool at the counter. The smell of bacon fills the room in the mornings, burgers in the afternoon. A waitress approaches carrying a pot of coffee. Pies are in the glass case. And there are donuts. Oh, those donuts!

Whenever I’m hunting or fishing in the area, a stop at Patten’s Cafe is called for. The usual cliental is made up of loggers, road workers, and sportsmen; those retired lead the storytelling. I always stop for two plain cake donuts. I assume they are fried in lard or Crisco, a little crunchy on the outside and soft, but dry inside. You’ll want coffee. Delicious!